Move over, cannabinoids, there’s a new component found in cannabis that is vying for everyone’s attention these days. Like cannabinoids, terpenes are compounds that are produced by the cannabis plant, but they are also produced by many types of plants.


Terpenes are well known in the aromatherapy world because they are the main part of the essential oils of the plants that serve as the basis of aromatherapy. They are the compounds that give each oil its aroma and taste and, in most cases, are responsible for the reported medicinal benefits of essential oils.

While there are many different terpenes known to exist in cannabis, only a few of them are produced in consistently in higher quantities. The most common terpene found in the plant world and often found in cannabis is alpha-pinene. This terpene is commonly found in pine needles and essential pine oil. It acts as an anti-inflammatory and also a bronchodilator. Contrary to the common misconception that cannabis consumers have poor short-term memories, this terpene also promotes alertness and memory retention.

Limonene is also commonly found in cannabis and many other plants, like rosemary, peppermint and juniper. This terpene acts as an anti-bacterial, anti-carcinogenic and antifungal. In some cases, it may promote weight loss, dissolve gall stones, and effectively relieve heartburn and gastrointestinal complications.

Linalool is a terpene found in lavender and is also commonly found in cannabis, especially indica-leaning strains. Linalool has sedative properties and is wonderful at treating anxiety and as an anti-convulsant and anti-depressant.

Beta-caryophllene is commonly found in cannabis and also the essential oils of black pepper and oregano, plus many green leafy vegetables. This terpene benefits the gastro-intestinal system and also has anti-inflammatory and analgesic effects. But more interestingly, beta-caryophllene is the only known terpene that actually interacts with the endocannabinoid system.

Like cannabinoids, it is able to bind directly with CB2 receptors, which are located in the gastro-intestinal system, the kidneys, heart, liver, lymph cells, endocrine glands, and reproductive organs. This dual purpose terpene carries with it a huge potential for medical benefits. The very fact that it works synergistically with cannabinoids reveals an important connection that exists among the various components of the cannabis plant. 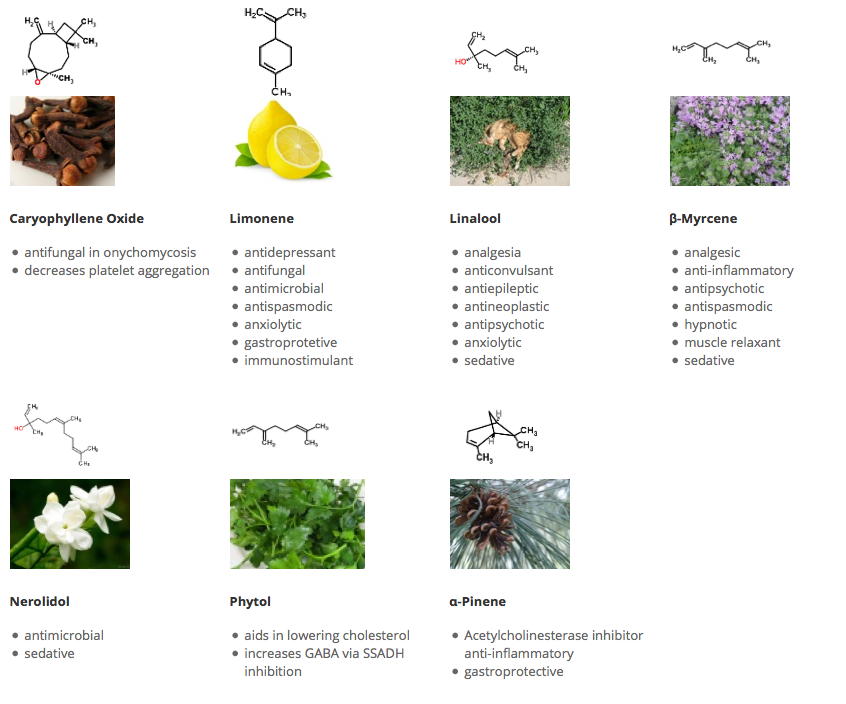 There are hundreds of chemical components in the cannabis plant, including cannabinoids, terpenoids and flavonoids. All of these components have specific pharmacological attributes that work best when combined with the rest of the components of the plant. All together, these chemical components work as a holistic therapy that can effectively treat countless different ailments.

As research is able to move forward with political and social advancements, more and more will be revealed about the benefits of this amazing plant.