From the moment of conception, babies are exposed to a flood of modern-day toxins and chemicals. Children are unique as their brains and bodies are undergoing rapid development. Evidence suggests that early recreational cannabis abuse can be harmful, but targeted cannabinoid therapy has the potential to be life-changing.

There exists a lot of information on the internet about the medicinal value of marijuana products for treating a wide variety of challenging symptoms and health conditions. The problem is that most of this information is aimed at the adult population, aged 18 years and older. The purpose of this article is to discuss the safe usage of medical cannabis products in children.

Children in the Modern World

Persons under the age of 18 years old are considered minors in South Africa. They are not legally allowed to drink alcohol and, according to the newly proposed cannabis bill, it will rightfully be illegal for them to use cannabis for recreational purposes or even for an adult to consume it in their presence. However, disease does not discriminate for age, race, sex or any other defining characteristic.

Children are exposed to the same toxins and infections as anyone else. Even babies are exposed to an array of toxins that never existed only decades ago. In fact, nowadays, the onslaught starts in the womb. From the moment of conception, a developing foetus shares a mother’s nutrients, but also the genetically-modified foods, antibiotics, microplastics, heavy metals, fluoride, glyphosate, petrochemicals and all sorts of other chemicals and toxins that have become an ordinary part of daily life in the modern world. Add to that a relentless bombardment of cellphone and WiFi radiation, which never existed until recent years, and twenty-first century diseases are hardly surprising.

When it comes to how the human race and society have evolved over the past century, the message is becoming crystal clear: we are doing it all wrong. Unfortunately, it seems that, collectively, we will not be doing much better anytime soon. So, the medical focus continues to be reactive, focused on treatment, rather than prevention. Medical marijuana can provide a natural alternative to pharmaceuticals. What Science Says About CBD and CBG

The main target of cannabis therapy is the “endocannabinoid system” (ECS), which is integral to healthy development during early years. Cannabinoids like CBD and THC interact with built-in receptor sites within the human body, changing how cells function. To understand how these plant compounds interact with the ECS on a scientific level, please read Cannabis Science.

Broadly, current research on the safe use of cannabinoid therapy during early development is limited, but suggests that CBD and CBG may be safer options than THC. However, as is usually the case with scientific evidence, more research is needed to determine long-term safety and consequences. Scientific evidence is inconclusive for treating children with neuropathic pain, comorbid major depressive disorder, anxiety and sleep in PTSD and Tourette syndrome.

Cannabis has been touted as a treatment for epilepsy for some time now. In recent years, CBD specifically has become famous for its ability to treat epilepsy and seizures. Evidence suggests that it is well-tolerated and safe for long-term use in young and old. It is even able to effectively alleviate treatment-resistant forms of epilepsy called Dravet and Lennox-Gastaut syndromes.

Due to its neuroprotective ability, CBD has shown promise for treating neonatal hypoxic-ischemic encephalopathy (NHIE) and perinatal asphyxia – conditions where a baby‘s brain damaged due to being starved of oxygen during birth. A study on children aged 1–17 years, with complex motor disorders, demonstrated the ability of CBD-rich marijuana to improve spasticity and dystonia, sleep difficulties, pain severity and overall quality of life.

One exciting potential treatment avenue for cannabis is in children with autism spectrum disorder (ASD), who demonstrate behavioural challenges, such as tantrums, non-compliance, aggression and self-injury. These maladaptive behaviours make treatment difficult, leading to limited long-term progress. The efficacy and tolerance of standard pharmaceutical treatment, which includes antipsychotics and mood stabilizers, is not favourable in this population.

Interestingly, 10-30% of children with ASD have coexistent epilepsy, as the conditions can share similar disease processes. The endocannabinoid system is believed to be integral to ASD, with several studies backing this up. Medical cannabis, in CBD-to-THC ratios of 20:1 and 1:1, has been proven to decrease irritability and other core autism symptoms, with no serious side-effects. Some children have even shown improved social deficits and reduced anxiety.

CBG is a lesser-known cannabinoid that is receiving a great deal of recent scientific attention due to its tremendous therapeutic potential. In short, just a few of the very promising treatment areas for this cannabinoid include antibiotic-resistant infections, inflammatory bowel disease, neurodegenerative diseases, colorectal cancer and inflammation.

Recreational THC and the Developing Brain

A recent animal study associated cannabis exposure during the perinatal period (the immediate weeks before and after birth) with lasting changes in neuron learning flexibility (synaptic plasticity), epigenetic misregulation, and significant changes in social behaviour and executive functions. It has been found that the regular use of marijuana in persons with attention-deficit/hyperactivity disorder (ADHD) before age 16 may cause poorer executive functioning (decision-making, working memory and response inhibition).

Research suggests that, in susceptible individuals younger than 18 years of age, recreational use of THC-rich cannabis (high THC:CBD cannabinoid ratio) poses a greater risk of unfavourable long-term side-effects, including loss of motivation, addiction, slight cognitive decline and schizophrenia (in genetically predisposed individuals). Adolescent use has also been associated with brain matter changes and functional impairment between different brain regions. It is assumed that usage in younger children would display similar effects.

Importantly, these unwanted effects are associated with the recreational use of high-THC cannabis. However, THC has been shown to benefit spasticity relating to developmental disorders and it has a profound ability to support cancer treatment and alleviate chemotherapy-induced nausea and vomiting (CINV).

Addiction is a contentious issue. It is a point of concern for children or teens who smoke cannabis or vape concentrates, but not for the therapeutic use of medical products, such as oral tinctures. Excessive consumption of marijuana may lead to dependency and addictive behaviours in susceptible persons. However, in responsible doses, it has shown to be a successful tool at combating addiction in cocaine users as well as reducing the consumption of highly addictive opiates in persons with chronic pain.

This highlights the importance of carefully weighing up all potential risks versus rewards, when considering any treatment option. 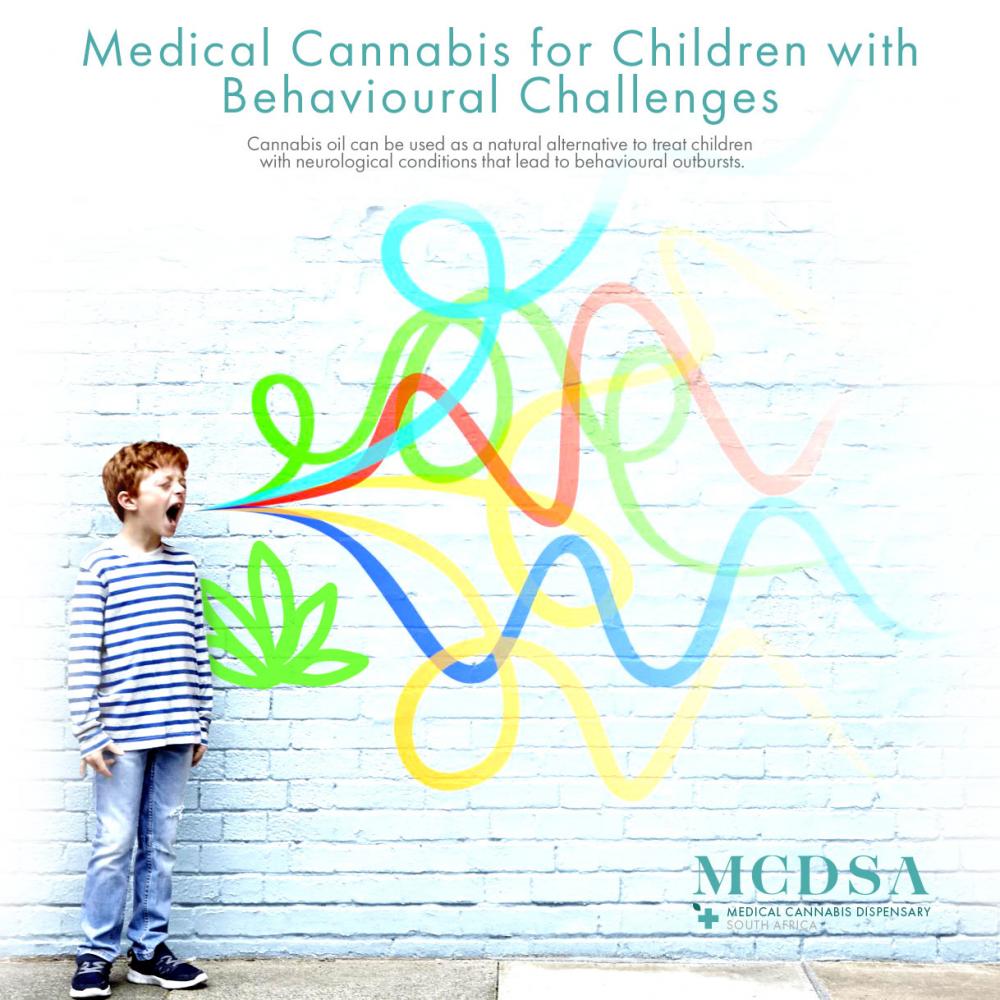 Medical Cannabis Use in Children

Nobody wants to see a child suffering. Modern diseases are on the rise and prescription medications are often ineffective, with numerous unpleasant side-effects. Research procedures are rigorous, expensive and often aimed at creating profitable drugs out of natural remedies, and marijuana is no exception. As a result, we are often forced to seek natural solutions of our own accord. When it comes to treating children, caution is the key word.

CBD is a safe and effective treatment option for children and CBG shows great promise. Remember that both are non-psychoactive. Most parents and carers have ended up here, seeking a natural alternative to conventional medicines, purely out of love and care for their child. Nobody knows your child like you do. It is important to educate yourself in order to weigh up the risk versus reward and make an informed health decision. Sometimes, anecdotal evidence may be enough to warrant careful experimentation, under medical supervision.

Finding a supportive and caring paediatrician or medical doctor to supervise cannabis-based therapies is always a good idea. He or she will be able check for drug interactions (though you should always double check on your own) and monitor progress from a medical standpoint.

CBD oil is the safest and preferred option, but CBG oil may be better for certain conditions. Specific cases may call for THC on a “needs must” basis – for example, relieving severe agitation in ASD or treating cancer and chemotherapy side effects. Of course, contraindications like a family history of schizophrenia still apply. We have highlighted just some of the science-backed medical CBD applications above, but there are many more. Medical cannabis is a without question a viable option for debilitating and life-threatening conditions.

Some child conditions that may benefit from medical cannabis include:

It is important to note that marijuana use in children is intended for medicinal purposes only. We do not recommend or condone recreational usage in kids. Cannabis products should always be kept safely out of reach of young ones to prevent unwanted exposure. Also, smoking is not an acceptable medical consumption method, especially for this young population. Orally dosed tinctures and pre-dosed capsules are best.

Controlled dosing with reliable products is always essential. Please see our Treatment Guidelines for Children and Neurodevelopmental Disorders for more information on medical conditions and dosing.

It is also importance to take into account the whole plant medicine concept known as the “entourage effect”, which states that marijuana compounds work better synergistically than they do alone.

Visit our Product Guide for more information on recommended full-extract cannabis oil (FECO) products of the highest quality – alcohol-free, no chemical residues and safe for children.

Contact us below to start your child’s medical marijuana journey now or if you have any further questions.