The villagers keep watch from January, waiting for police helicopters to thud over the hills. Every year, for nearly three decades, their plantations have been poisoned towards the end of summer, right before harvest, leaving behind fields of withered stalks.

“We hear rumours that they are coming, that they’ve started spraying nearby,” said one resident, a middle-aged woman with smooth skin and arched cheeks, when GroundUp visited in March 2016. “Then we know the helicopters will be arriving soon — but there is nothing we can do.”

The village of 32 huts lies near the base of a steep valley outside Lusikisiki, in the Pondoland region of the Eastern Cape. The village is accessible only on horseback or by foot. Walking hard, the trek takes an hour from the nearest dirt road, descending a rocky path, wading through a river, and climbing a narrow, crumbling ridge; it takes longer if weighed down by infants, groceries, or large sacks of dagga.

A waterfall churns further upstream. In wet season the water silts up and turns a pale, milky brown. The settlement looks out over the river, dwarfed by vertiginous green cliffs. Donkeys, chickens, and goats move between blue rondawels; cattle graze higher up the slopes or on the floodplain, herded by young boys wielding sticks.

In front of each hut, protected from livestock by wire fences and dry thorn branches, is a dense field of crops. Other than a few stalks of maize and sorghum here and there the fields are filled with marijuana shrubs, their five-pointed leaves stretched up towards the sun. 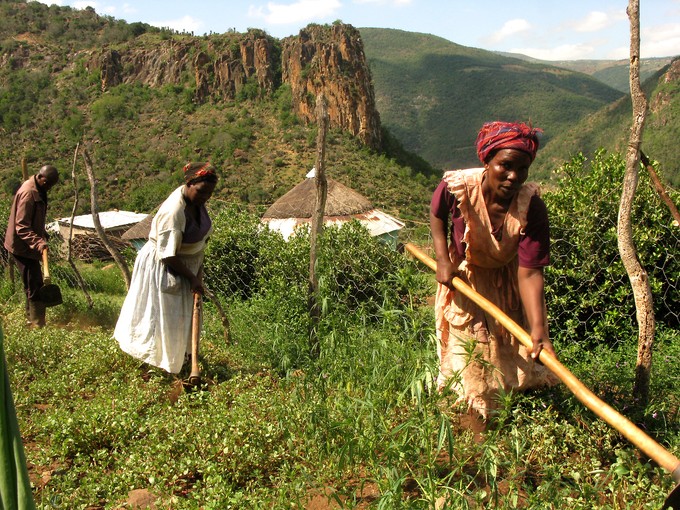 Marijuana farming sustains entire communities in the rural Eastern Cape, an important cash crop in a deeply impoverished subsistence economy. It has also been illegal under South African law since 1929. For more than 60 years the state has conducted regular eradication programmes but failed to halt the practice, which is sustained by consistently high demand for dagga and a lack of alternative options for the farmers who produce it, among other factors.

At first, police squads marched into villages and uprooted plantations by hand, burning whatever they found and booting suspects into jail. They switched to using herbicides in 1980, dispensing chemicals using hand-held pumps. (This way, one policeman could “do the work of 78”, a Major-General named C.F. Zietsman informed reporters at the time). By the end of the decade, helicopters had replaced ground patrols, greatly expanding the reach of anti-cannabis operations and making it possible for pilots to wipe out entire fields within minutes.

Today, a small group of activists is fighting to halt the spraying program, arguing that it is unconstitutional, environmentally damaging, and a severe health risk. In the meantime, Pondo villagers wait once more for helicopters to drop from the sky. 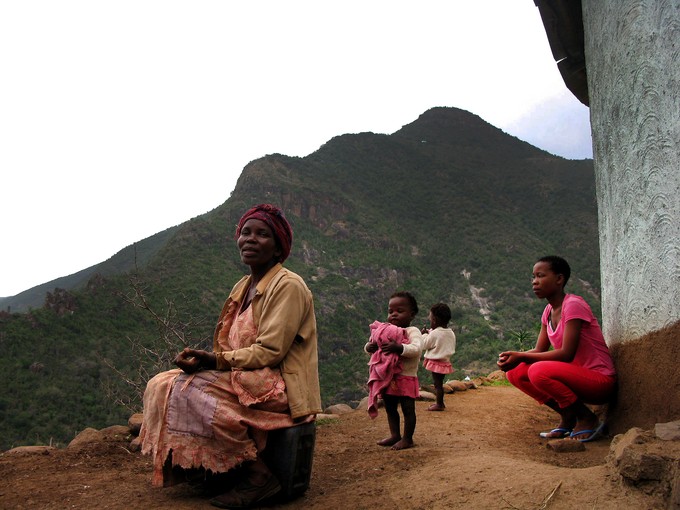 Another resident of the village, Pam*, aged 57, last heard the helicopter motors one morning in March 2015. Knowing her marijuana crop would almost certainly be destroyed again — her plot, around half the size of a football pitch, is located right in the middle of the settlement — she walked slowly uphill to wait. “I get afraid whenever they come,” she told me. “I know what I’m doing is illegal. But it’s my only way of making any money.”

Dressed in shoes without laces and a torn brown jacket, she had just finished work for the morning, chopping down chest-high marijuana bushes with a sickle. She tucked the sickle into her purple headscarf, bundled the plants inside a blanket, and carried the load up to her hut, where she invited us to sit on carved wooden stools. It was 7.30 am, three hours after most villagers had woken. Men and women walked by with marijuana bundles balanced on their heads. Hens scratched for marijuana seeds at Pam’s feet.

“I can’t spend any longer in the fields today. I have arthritis,” she told me. She would spend the rest of the day sleeping, preparing food for her grandchildren, and cleaning her harvest. (Marijuana leaves are no good for smoking and must be stripped from the plant. The flowers, or ‘buds’, carry the psychoactive compounds that make people high.)

Pam pointed to her field, less than 30 metres away. “The poison drifts into our homes when they spray,” she said. “It makes us sick. It kills our mielies. Our animals fall ill when they eat the plants.”

The poison in question, glyphosate, was patented by agri-giant Monsanto in 1974 and first registered in South Africa the following year. Now the world’s top-selling herbicide, it works by inhibiting the production of essential amino acids, killing any plant not genetically modified to withstand its effects.

The best-known glyphosate formulation sells under the brand name Roundup. It is used widely in South Africa to control agricultural weeds, remove invasive plants from water bodies, and to spray road and railway verges. The South African Police Service (SAPS) uses a different formulation called Kilo Max to target marijuana fields, maintaining that it poses no threat to human, animal, or environmental health.

But glyphosate’s safety has recently been challenged at an international level, declared a “probable carcinogen” by the World Health Organisation’s International Agency for Research on Cancer (IARC) in March 2015, and drawn formal objections against its use in Europe from a prominent EU public health committee in March this year.

Local opposition to marijuana spraying is not new. In 1990, a coalition of civil society organisations in the former Natal province successfully lobbied government to ban the use of paraquat, a different herbicide, during its aerial eradication programmes. (Adrian Vlok, Minister of Law and Order at the time, signed off on the decision.) In 1995 the same coalition sought an interdict against the SAPS for using glyphosate, claiming that the substance was “highly toxic to humans”, but failed to prevent further spraying. Now, cannabis activists the Dagga Couple — whose own crusade to end the prohibition of marijuana in South Africa began when they were charged with dealing dagga in 2010 — are leading a new campaign against the program.

“South Africa is the last country in the world to spray glyphosate on so-called drug plantations from the air,” said Jules Stobbs, one half of the pair. “We see this as a human rights issue. We’re going to shut it down.” 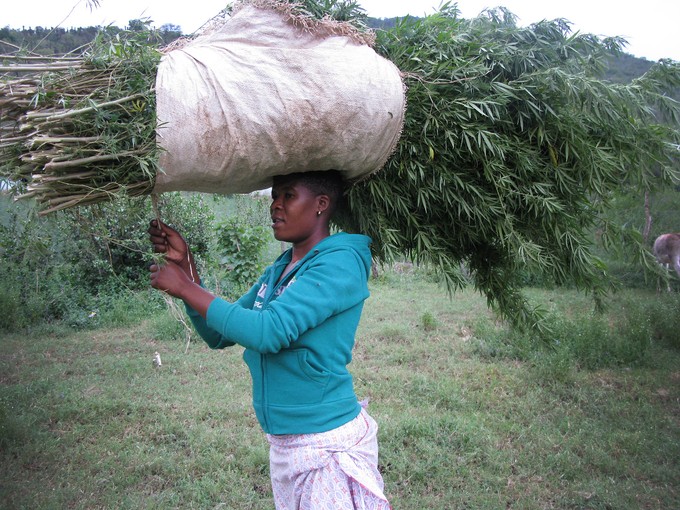 Colombia suspended its own 20-year aerial eradication program — which targeted coca plantations, used for producing cocaine — following publication of the IARC findings last year. It was the final country in Latin America to use glyphosate for poisoning drug crops. For Stobbs, this is a lead the South African government should follow. His non-profit organisation, Fields of Green For All, launched legal proceedings against the SAPS earlier this year, partnering with the Transkei Animal Welfare Initiative and the Amapondo Children’s Project.

In January, attorney Ricky Stone submitted a letter to the SAPS on their behalf, requesting the “immediate” suspension of glyphosate spraying in the Eastern Cape and an independent review of its “effectiveness, appropriateness, and compliance” with local and international regulations. The SAPS refused to accede to the request but have not yet conducted any aerial eradication operations this year. GroundUp will report on the legal challenge more fully in a forthcoming article.

At dusk the villagers sat outside their homes, processing marijuana. Bunches hung drying inside every hut. The buds were tiny and choked with seeds. Contrary to SAPS reports — which repeatedly use seizures of high-grade cannabis, grown by specialist producers with access to capital, to justify spraying rural communities — the weed grown in the former Transkei is mostly cheap, and of very poor quality. “It’s ditch weed,” said one industry source. “This stuff sells in townships and at taxi ranks. None of it gets exported.”

According to villagers, buyers sporadically hike into the valley to purchase dagga. Recycled one-litre yoghurt containers of dagga usually sell for between R50 and R100 each.

Sniffing snuff, Cynthia*, 47, said that she typically sold a full thirty-litre plastic tub for R600, cutting her price to trade in bulk. It was the only cash she earned, supplementing small social grants for three of her six children, she said. The nearest grant pay point, along with the nearest school, hospital, and store, is two to three hours walk away. “Kids leave home at four in the morning to reach school by seven,” she said. “When people fall ill we carry them on wooden stretchers; the journey takes two days. Pregnant women walk to hospital to give birth.”

She was not married, she said, because the father of her children could not afford to pay lobola. “People don’t bother getting married here anymore.” At the river, stained a flat brown by eroded topsoil, three grandmothers dipped enamel bowls into the water to fill their buckets. They lifted the buckets to their heads and walked back up to the village. A spring that supplied drinking water dried up in last year’s drought; with no access to piped water, residents now drink directly from the river, which drains past upstream settlements. (The village also has no electricity supply.) Each year, children die of cholera, villagers said. Their bodies are buried in the fields, amid the marijuana bushes. Occasionally, a child gets taken to hospital in time, and survives.

“The government doesn’t care about us,” an old man with a stooped back told me. “They only send the helicopters with poison. They don’t offer ideas or projects after destroying our crops.”

He said he had been growing dagga for more than 40 years. Like everyone else I spoke to in the village, he professed never to have smoked the stuff, fearing it would make him “crazy”. More than 20 years ago, policemen rode in on horseback and caught him sleeping beside piles of marijuana. “They beat me until I shat myself,” he told me, wheezing with inexplicable laughter.

He spent two years in jail for possession after being arrested, resuming dagga production upon returning home. Later he moved to Durban to work in sugarcane plantations, but found the conditions too strict and the pay too low. He still grows dagga today. “I feel bad doing this in front of the children, because I know it’s against the law, but what are my options?”

From the sky, his village is only a small patch of the Pondoland dagga-producing region, which extends over hundreds of square kilometres. To a helicopter pilot, his plantation represents a tiny fraction of the area to be cleared. The old man tilted his head back, shutting his eyes against the sun.

“The police used to come and arrest us,” he told me. “Now they fly in and poison our crops. Maybe that’s all that’s changed since 1994.”

* Names of villagers have been changed. Permission was given for use of close-up photos.

Kimon de Greef is a freelance journalist from Cape Town.

For only R20 you can help GroundUp publish more stories like this. Here are the ways to donate: Givengain | EFT | Snapscan | US