While the world continues to search for an elusive COVID-19 cure, medical marijuana has received its share of the spotlight. In early studies, compounds like CBD, THC and terpenes have shown remarkable potential, especially combined as whole-plant extracts. In fact, Cannabis sativa could potentially stifle every effort of the SARS-CoV-2 virus to cause disease. But beware – timing, strain and method are crucial.
Health, News


Some of the most promising research points to the potential of this natural plant medicine to dampen the cascade of inflammatory compounds (“cytokine storm”), which leads to one of the most deadly symptoms, acute respiratory distress syndrome (ARDS). However, blunting the natural inflammatory response too early could enhance disease progression.

While medical cannabis is not currently an approved treatment for COVID-19, researchers have also identified several other potential ways that it may be able to aid treatment of the disease and maybe even prevent it.  It’s hard not to be excited by early scientific findings, but we always urge people to err on the side of caution and not get carried away, especially with such a contagious, slippery and novel coronavirus.

The Story So Far

This is the second article in our four-part pandemic special series. If you missed it, here’s part one.

Based on the highly-infectious and potentially life-threatening nature of SARS-CoV-2, the whole world quickly paid attention and began seeking solutions in the early months of 2020. While the pharmaceutical industry sought resolution through existing drugs and began streamlining COVID-19 vaccine production, many of us were left hoping for a natural solution. Madagascar went as far as to prescribe Artemisia afra as part of a nationwide traditional remedy.

During the early days of the pandemic, medical and scientific communities quickly established that a cytokine storm (out of control inflammatory immune response) was behind the virus’s ability to wreak havoc and destruction in the bodies of persons with the most severe acute infections. In these severe cases, normally protective white blood cells begin to release inflammatory compounds at such a rate that they become destructive and, sometimes, even deadly.

This overactive immune response is behind one of COVID-19’s most deadly symptoms, acute respiratory distress syndrome or “ARDS”, which creates fibrosis in lung tissues and often leads to death. So, questions immediately began around the remarkable anti-inflammatory ability of medical marijuana compounds, such as cannabinoids and terpenes. If Cannabis sativa compounds like CBD and THC could effectively downregulate specific inflammatory cytokines, this could lead to disease remission and save lives.

Research thus far has shown cannabinoids and terpenes to be at the forefront of medical cannabis’s potential in the fight against “Covid”. Specifically, the promise behind cannabidiol (CBD) and delta-9-tetrahydrocannabinol (Δ9 -THC) may lie not as a cure, but as an adjunct to conventional treatment.

Remarkably, early studies have shown that medical cannabis has the potential to stifle almost every attempt of COVID-19 to impact our lives:

That is not to say that any marijuana will do – certain strains have proved to lack any benefit. Nor is it a promise of a “cure” on any of these four levels. The key word here is “potential”, backed by existing scientific evidence. Dosage and timing are crucial and will need more in-depth research (which we can only hope to ever see), while the consumption method is undoubtedly essential too.

However, what is apparent is that whole-plant extractions operate better than isolated compounds – combined effects of cannabinoids like CBD and THC, terpenes and other marijuana compounds. Let’s take a closer look at the four research-backed benefits, followed by important future considerations.

Angiotensin-converting enzyme II (ACE2) receptors – predominantly in the mouth, sinuses, lungs and digestive tract – serve as doorways for the SARS-CoV-2 virus to enter the body, by binding with their spike (S) proteins.

Early on, two Canadian researchers hypothesised that specific CBD-rich Cannabis sativa strains might be able to modulate ACE2 receptors, temporarily reducing their genetic expression. In theory, these specific marijuana strains would be able to decrease susceptibility to becoming infected with the COVID-19 as well as lower the risk of an already-infected person passing it on.

Given the widespread, systemic locations of ACE receptors throughout the human body, including the cardiovascular system, it stands to reason that disease progression may be limited too.

A brand new study has now shown CBD and THC to be more potent antiviral agents against SARS-CoV-2 than pharmaceutical drugs lopinavir, chloroquine, and remdesivir, which are all commonly prescribed to combat the virus. Other cannabinoids were also studied in vitro, with THCA, CBN and CBDA showing modest antiviral activity.

THC has previously shown an antiviral ability against certain herpesviruses, such as inhibiting the reactivation of Epstein-Barr virus (EBV) infected B-cells. Under certain circumstances, CBD has shown potential to increase production of interferons – protein signalling molecules that stimulate immune cells and prevent viral replication. However, it has shown a biphasic nature in studies and is largely considered immune-suppressive against pro-inflammatory compounds like IL-2 and IFN-γ. This highlights the importance of dosing and the need for future COVID-specific studies. 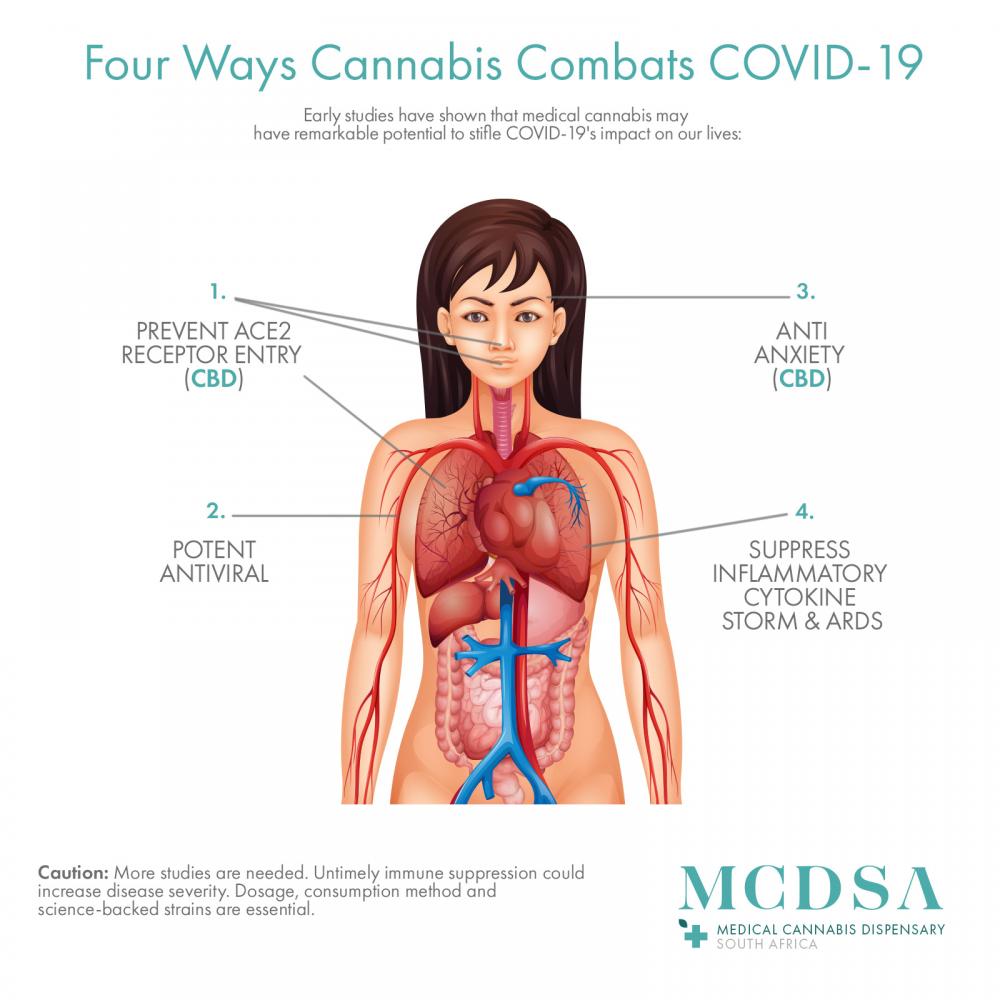 COVID-19 can cause the body’s natural immune response to over-activate to dangerous levels. Medical cannabis may have the potential to prevent life-threatening complications by blunting the immune system, thereby reducing the inflammatory “superstorm” and consequent respiratory tissue damage from acute respiratory distress syndrome (ARDS).

One study confirmed the potential of CBD to reduce pro-inflammatory cytokines and protect against respiratory tissue damage after inducing ARDS in mice. In an in-house study, Israeli scientists from Eybna then found that a combination of CBD in conjunction with NT-VRL™ (a formulation of 30 difference terpenes) was twice as powerful at inhibiting cytokine activity as the corticosteroid dexamethasone, which is commonly prescribed for severe inflammatory COVID-19 symptoms. Not only was this a win for medical cannabis, but it also backs up MCDSA’s stance on the synergistic “entourage effect”.

THC has also shown potential to control the cytokine storm and consequent lung injury, as well as promote beneficial lung bacteria, after initiating ARDS in mice. One of the latest published studies found that extracts from three specific C. Sativa strains effectively inhibited TNFα and IL-6, which are thought to be two of the main culprits behind the cytokine storm, ARDS, lung fibrosis and death from severe COVID-19. Furthermore, these extractions showed inhibition of COX2 and CCL2 inflammatory pathways.

The study authors were hardly surprised by these results, as they had previously studied the beneficial effects of over 100 strains and even filed patents on them to treat rheumatoid arthritis, multiple sclerosis as well as oral, skin and gut inflammation. They also found that CBD and THC isolates were not as effective and the presence of a specific terpene, caryophyllene, may be significant. They stated that they believe fully in the “entourage effect”, backing up the findings of the Israeli scientists from earlier. Another win for the entourage effect.

You see, the medicinal properties of this healing plant are undeniable. But isn’t it great when science backs up what we already know? While we don’t know specifically which strains were studied, the information given is that they were high in THC, with the presence of CBD and minor cannabinoids. Our recommended products contain the full spectrum of marijuana plant compounds, including major and minor cannabinoids, terpenes and flavonoids. They are full-extract cannabis oils (FECO).

We’ve outlined the first three evidence-based mechanisms by which medical marijuana may be significant in the fight against Covid. But the fourth “anti-anxiety” layer deserves special attention. Look out for the next article, covering “The Mental Health Pandemic”.

Our goal at MCDSA is always to deliver the facts, for better or worse. We are not promoting cannabis as a cure for COVID-19. When it comes to the ability of medical marijuana compounds to combat the disease, the fact is that future studies on human subjects are needed to (1) confirm existing science-backed theories and (2) iron out other important considerations, such as:

Timing and dosage. While an overactive immune response can be particularly dangerous during the later stages of the disease, the natural immune response is still necessary to fight the virus off early on. An untimely suppression of the immune system could have detrimental consequences, such as increased disease severity. It is not yet clear if this early, necessary immune response depends on the very same cytokines that need to be suppressed later on – those effectively targeted by CBD and terpenes.

With regards to dosage, an in vitro (“test tube”) experiment found that a CBD dosage of 50μM led to increased cytotoxicity and cell death, but 12.5μM safely inhibited SARS-CoV-2.

Strain specificity. The above-mentioned studies highlighted the benefits of specific strains, studied in labs. Importantly, in one study that showed beneficial effects, an extract from another strain showed no effect and one was potentially harmful. This highlights that scientifically studied strains are essential, if medical marijuana is to be successful as a potential treatment for severe COVID-19. It’s currently not possible to tell exactly which strains will be beneficial, unless they are studied via the same methodology.

Smoking and vaping. One study found an increased incidence of disease cases among general cannabis users. This evidence pointed to a correlation but not necessarily causation, meaning the link may or may not be pure coincidence. However, it should not be misinterpreted as simply being untrue. Smoking, in general, does cause mild, chronic inflammation known as bronchitis, which theoretically puts smokers at risk of more serious disease, should it progress to reaching the lung tissues.

The social aspect of sharing joints and vapes or passing around smoking equipment also increases the risk of contamination. Bad news, vapers, you’re not exempt. While vaping is an effective tool for delivering medical cannabis into one’s system, it too can irritate the lungs and respiratory tract. Future treatment potential may lie in medical-grade products like tinctures and capsules.

Viral mutation. There are believed to be in excess of 4000 mutations from the original SARS-CoV-2 currently being monitored by scientists. Recent strains (like the UK’s B1.1.7) are posing more concern due to increased transmission rates. In South Africa, we like to do things in our own unique way. So much so, it seems, that we now have our own so-called “South-African strain” (B1.351), with several unique mutations that are interesting scientists.

Recent genetic mutations have caused more transmissible variants (in other words, they’re more infectious), yet so far they don’t seem to be making people any sicker or at greater risk of increased disease severity. However, more people becoming infected ultimately leads to more deaths. As the virus continues to evolve, science is playing catch-up and findings relating to old variants may eventually become null-and-void – let’s hope this won’t be the case.

The bottom line is this: we may never see highly-dependable, phase 3 scientific studies on the effect of medical cannabis compounds on COVID-19. Unfortunately, the ultimate goal of research is usually to generate a profit, rather than openly share information that could potentially help millions and save countless lives. Such is the nature of the modern world. The best thing to do is take a deep breath and accept it. If that doesn’t work, well, CBD works great at relieving anxiety too. Seriously.

Keep your eyes peeled for the next article in the series, which covers the ‘Mental Health Pandemic’ during COVID-19. Contact us below with any questions you may have.