The Role Of Cannabis In Epilepsy And Seizure Disorders

The medical definition of seizure is a clinical expression of abnormal, excessive, synchronous discharge of neurons residing primarily in the brain’s cerebral cortex. Alternatively, the term epilepsy encompasses a broad range clinical syndromes characterized by repeated seizures over time unprovoked by an acute systemic or neurological insult.


What Is Epilepsy? Seizures vs Epilepsy

“It’s the last thing you worry about before you go to bed; and the first thing you think about when you wake up in the morning.” – Heather Jackson

These definition’s however fail to capture the feelings of helplessness felt by parents, family members, and caregivers when they watch a loved one endure the experience of a having a seizure – especially when that loved one is a child.

“It’s the last thing you worry about before you go to bed; and the first thing you think about when you wake up in the morning,” says Heather Jackson, Executive Director of Realm of Caring and mother to a child with an epilepsy syndrome. 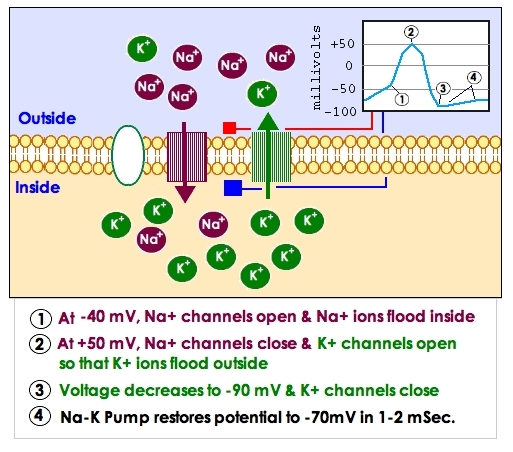 Under normal physiological conditions, the brain works by sending electrical signals through the nerves, which coordinate all of the functions of the body. These nerve impulses, are generated through a physiological process called an action potential. A simplified way to understand the concept of action potentials, is to view each nerve cell, or neuron, as electrically polarized. That is, there is an electrical difference between the inside and outside of a cell, created by the relative movement of the ions sodium (Na+) and potassium (K+).

This difference is maintained by the cell membrane which surrounds each cell. Neurons receive stimuli from other neurons in the area via neurotransmitters – chemicals that regulate brain function. This stimulation causes the polarity within each neuron to move towards a point which would cause the neuron to fire. Once a neuron has received so much stimulation that its polarity has reached the threshold point, an action potential is generated. This process is highly regulated under normal conditions.

Individuals with epilepsy can manifest any of the above seizure types as part of their clinical condition. In fact, the International League Against Epilepsy recognizes over twenty epilepsy syndromes, each defined by a distinct set of signs and symptoms.

It is important to note that most epilepsy syndromes are extremely rare, with the prevalence  in the US population ranging from 6-10/1000 individuals. However, the experience for patients with these disorders and their family members is quite significant. In children, many epilepsy syndromes have a strong genetic component, including benign familial infantile epilepsy, severe myoclonic epilepsy of infancy (Dravet syndrome), and Landau-Kleffner syndrome.

“Patients with this syndrome have a high propensity to enter into a life threatening state of status epilepticus, where the brain is in a persistent state of seizure.”

Perhaps the most notable and devastating of these syndromes, Dravet Syndrome, is a severe and intractable epilepsy condition. It presents in the first year of life as a series of prolonged generalized clonic seizures in the setting of otherwise normal cognitive and motor development.

Patients with this syndrome have a high propensity to enter into a life threatening state of status epilepticus, where the brain is in a persistent state of seizure. Unfortunately, children with this syndrome develop persistent gait ataxia – the inability to coordinate walking – in addition to cognitive and behavioral impairments.

Treatment of epilepsy syndromes is a complex process involving a combination of drug therapy, diet, and even surgical intervention for some intractable cases. Antiepileptic drugs (AED) are administered according to the seizure type which is being treated. Additional factors such as side effect profile, cost, and method of administration are also highly considered, especially in the case of children.

While undergoing AED therapy, children will have to have their blood levels closely monitored in order to ensure that drug levels remain in the appropriate range – toxic levels of some AEDs may initiate seizure activity themselves. Patients and caregivers are very familiar with having to slowly increase the dosage of their medication to reach a maintenance dose which will provide optimal seizure control.

In 20-40% of children with epilepsy syndromes, lack of efficacy and side effects lead to the addition of a second AED to the therapeutic regimen. This further complicates treatment therapy however, as drug interactions and adverse interactions (ex. the induction of new seizure types) become a greater possibility once a second AED is introduced.

Additional options for those who have intractable seizures include consuming a ketogenic diet, which is a diet high in fat and protein and low in carbohydrates. The theoretical basis for this diet stems from the physiological principle that the brain has two sources of fuel: glucose and ketone bodies.

By significantly reducing the amount of carbohydrates in the diet, the brain will use ketone bodies as its primary fuel source which lowers the seizure threshold in patients. A meta-analysis of the efficacy of the ketogenic diet showed that after 6 months on the diet, approximately 60% of children had a greater than 50% seizure reduction, with 30% of children having greater than 90% seizure reduction.

Unfortunately, multiple forms of AED therapy, switching to a ketogenic diet, and surgical intervention have failed to provide adequate seizure control for some epileptic children. It is for these patients and caregivers that medical cannabis therapy has provided a renewed sense of hope; but it is a decision that isn’t taken lightly.

“I never ran any of the pharmaceutical options by my family members, but I felt obligated to do so when we were considering cannabis therapy.” – Heather Jackson

“I never ran any of the pharmaceutical options by my family members, but I felt obligated to do so when we were considering cannabis therapy,” says Heather Jackson.

As Executive Director of Realm of Caring, breeders of the now famous Charlotte’s Web strain, Jackson is a strong advocate for cannabis therapy while managing expectations. “This isn’t a cure but it’s an option, an option that shouldn’t be relegated to an underground market,” she explains.

It seems that many lawmakers across the country are starting to agree with Jackson, as 11 states now having CBD-only legislation on their books – this is in addition to the 20+ states which have broader medical marijuana laws. “Unfortunately we have a lot of families who have to relocate, hopefully that won’t be an issue much longer,” says Jackson.

The Role Of Cannabis Therapy In Treating Epilepsy

The science on cannabis therapy in treating epilepsy is still in its infancy, but results have been promising. Historically, the English neurologists Drs. Russell Reynolds and William Gowers used cannabis Indica in conjunction with bromide as a therapy for epilepsy in the late 19th century.

In more modern preclinical animal studies conducted in the 1970s, CBD was shown to have anticonvulsant effects when seizures were acutely induced in mice. Later studies revealed a potential mechanism for this effect, showing that CBD raised the threshold requirement after one action potential, making it more difficult for subsequent action potentials to fire and propagate seizure activity. In humans, CBD has passed through the required safety and pharmacology trials, with very few issues or concerns. The cannabinoid is well tolerated and has no significant side effects or adverse reactions, which certainly cannot be said of AEDs.

Given these results, GW Pharmaceuticals was given the go ahead to conduct preliminary phase 3 clinical trials with their drug Epidiolex in select hospitals in the US under the FDA’s expanded access Investigational New Drugs (IND) program. Initial results have proved promising with an overall 44% seizure reduction seen in the 27 Dravet syndrome patients tested. Epidiolex is an investigational drug which comes in liquid form and contains 98% CBD, trace quantities of some other cannabinoids, and no THC. In spite of the promise of this drug, it will be years before the drug is available to the approximately 466,000 patients who could benefit from it.

In addition to undergoing three separate tests for purity, potential contaminants, the Charlotte’s Web extract is tested for it’s cannabinoid content – the cannabinoid profile is approximately 28:1 CBD to THC. Patients are started at 0.5mg/lb, and slowly increase the dose up until seizure control is established.

Out of 200 children treated at Realm of Caring, 78% have seen seizure reduction with 25% being almost 100% seizure free. Furthermore, Jackson reports, “Even if they don’t see the significant seizure control there are developmental gains.”

Realm of Caring has also been providing a strain of cannabis high in THCA for patients who have failed the CBD-rich treatment, and has seen some success here as well. As Jackson importantly points out, “These are very intractable cases, patients on average have tried at least 12 different therapies prior to cannabis, moreover, the safety profile is like night and day.”

In spite of the success, Jackson reports that the work of Realm of Caring is still an uphill battle “The epilepsy community much like cannabis has an unfair stigma.” Hopefully, the continued education and lobbying of policy makers by caring parents will move public understanding and acceptance of both epilepsy and cannabis therapy into the mainstream.