Cannabis topicals are available as creams, oils, lotions, sprays, balms, or ointments, topicals are applied to the skin and absorb through the epidermis (the outer layer). This relatively unknown avenue of consumption allows patients to treat conditions of the skin, joints, and muscles.


Cannabis is typically consumed via smoking or vaporization. In fact, one of the largest challenges for those in the medical profession who embrace cannabis as a medicine and a wellness agent is convincing patients that they should ditch joints and pipes for vaporizers. What if, however, a patient has a respiratory ailment or other condition that prevents inhaling smoke or even vapor? Possibly they simply prefer not to smoke or vape.

The proverbial red headed stepchildren of the world of medical cannabis consumption are topicals. Available as creams, oils, lotions, sprays, balms, or ointments, topicals are applied to the skin and absorb through the epidermis (the outer layer). This relatively unknown avenue of consumption allows patients to treat conditions of the skin, joints, and muscles using topicals infused with whole plant cannabis or an individual cannabinoid, such as THC or CBD.

While most cannabis users are unaware of topicals, even fewer know that examples featuring THC produce no psychoactive effect in patients. Thus, seniors, children, pilots, and anyone who either cannot or does not desire to experience a psychotropic “high” can use THC-infused topicals with confidence.

Psoriasis is a condition involving the relatively rapid buildup of skin cells on the surface of the epidermis. This abnormal accumulation of skin — which develops thick scales that are white, grey, or silver and called plaques — results from a change in the lifecycle of the cells. Psoriasis is believed to be inherited; family history is significant. 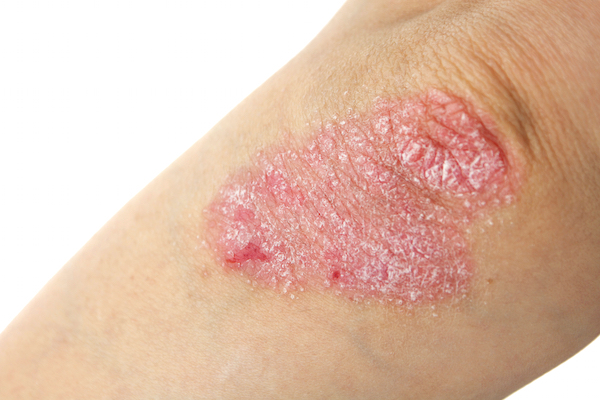 The most obvious symptom of psoriasis is red patches of skin that are sometimes relatively large and covered by the thick, silvery scales of plaque (dead skin cells). Other symptoms include dry or cracked skin (which may bleed), abnormal nails, and joint disturbance (inflammation and swelling are common). Despite its appearance, this condition is not contagious. African Americans are about 50 percent less likely to have the disease than Caucasians.

It is estimated that up to three percent of Americans have psoriasis, which results in more than 10 million sufferers in the United States alone. Globally, roughly 125 million people are afflicted with the condition. Unfortunately, there is no known cure for this highly uncomfortable and often stigmatized disease, of which eight major categories exist, depending on the body areas affected and nature of the rash-like patches of plaque.

Because psoriasis is caused by problems with the immune system, cannabis is an especially effective treatment. The cannabinoids in cannabis fit perfectly into special receptors in the endocannabinoid system of the human body. These receptors, called CB1 and CB2, are concentrated in the brain/central nervous system and the immune system, respectively. However, the latest science reveals that each receptor type is found throughout almost all organs and tissues of the body, just with different expressions (densities and patterns).

Conventional pharmaceutical drugs used to treat psoriasis, typically systemic immuno-modulating agents, involve many problems that are not associated with the use of cannabis or cannabis topicals. These include fever, diarrhea, liver dysfunction, and increased chance of infection. Thus, cannabis effectively deals with the significant cause of this skin condition, inflammation, and its chief symptoms, pain and discomfort — all while avoiding the negative side effects of pharmaceutical drugs.

Very few research studies have been conducted to investigate the medical efficacy of cannabis and its components for skin ailments such as eczema and psoriasis. The little formal and informal research that is available, especially in the form of anecdotal testimonies and case studies, reveals that cannabis is very effective at dealing with this disease that involves the immune system and sometimes produces severe inflammation within the skin.

Cannabis is a nuanced and symbiotic medicine, individual samples of which may contain more than 100 cannabinoids and 200 terpenes, the two categories of major medicinal molecules within the plant. Thus, the specific benefits gained from topical use of this herb are highly dependent on the quality of the cannabis employed by a patient, as well as its particular makeup. Some strains are rich in THC, while others, although more rare, have unusually large volumes of the non-psychoactive cannabinoid CBD. 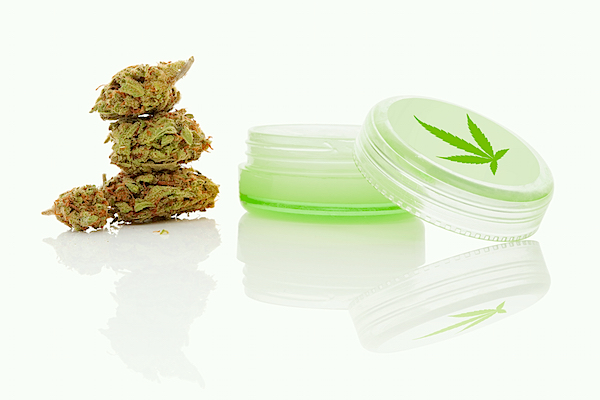 Because cannabis is most effective at battling pain, inflammation, and nausea, it is especially adept at helping sufferers of psoriasis, arthritis

, and other inflammation-based conditions. However, it is important to note that each strain of cannabis offers a distinct cannabinoid and terpene profile and will, thus, have maximum efficacy with a particular disease or only a certain percentage of a patient population.

Although not a formal study, the Gwynedd Cannabis Club in Wales and the United Kingdom conducted a nine-day experiment in which it used cannabis oil to treat acute psoriasis. One subject was treated with a conventional pharmaceutical therapy, a chemotherapy drug called Methotrexate. This drug resulted in fever, diarrhea, abnormal liver function, and increased chance of infection.

However, when the same subject was treated with cannabis instead of Methotrexate, she experienced no negative side effects and a complete healing of her skin. In fact, she was able to go swimming with her family — something her severe psoriasis had previously prevented — for the first time following the brief cannabis therapy. This treatment regimen involved three treatments of topical cannabis oil daily for nine days.

Unfortunately, very little research has been conducted regarding the medical efficacy of cannabis-infused topicals. In the United States, studies are rare and human trials nonexistent due to the Schedule I status of cannabis under the Controlled Substances Act. This legal categorization groups cannabis with heroin and considers it highly addictive, dangerous, and possessing zero medical value.

Until cannabis is removed from the Controlled Substances Act, or is moved to Schedule III or lower, robust research studies — especially those involving actual humans and high-quality cannabis that respects the realities of legal states and black markets — will simply not occur in the United States. Until then, the medical establishment and patient advocates who embrace this herb for its significant medical efficacy will be forced to rely upon the studies being conducted in progressive nations like Israel, Spain, and even Mexico.